Your cart is empty.
Whanganuilibrary.com 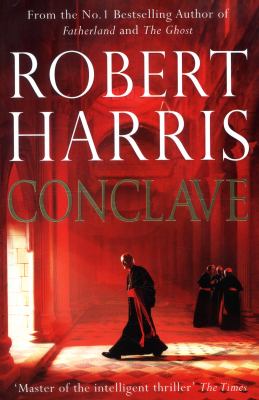 BookPublisher: London : Hutchinson, [2016]Copyright date: ©2016Description: 289 pages ; 24 cm.Content type: text Media type: unmediated Carrier type: volumeISBN: 9780091959166 (hardback); 0091959160 (hardback).Subject(s): Popes -- Election -- Fiction | Cardinals -- Fiction | Vatican City -- FictionGenre/Form: Political fiction.DDC classification: 823/.914 Summary: The Pope is dead. Behind the locked doors of the Sistine Chapel, one hundred and eighteen cardinals from all over the globe will cast their votes in the world's most secretive election. They are holy men. But they have ambition. And they have rivals. Over the next seventy-two hours one of them will become the most powerful spiritual figure on earth.
List(s) this item appears in: 9. Your Best Reads of 2017
Tags from this library: No tags from this library for this title. Log in to add tags.

" SUNDAY TIMES BESTSELLER ' Unputdownable' Guardian 'Gripping' Sunday Times The Pope is dead. Behind the locked doors of the Sistine Chapel, one hundred and eighteen cardinals from all over the globe will cast their votes in the world's most secretive election. They are holy men. But they have ambition. And they have rivals. Over the next seventy-two hours one of them will become the most powerful spiritual figure on earth."

The Pope is dead. Behind the locked doors of the Sistine Chapel, one hundred and eighteen cardinals from all over the globe will cast their votes in the world's most secretive election. They are holy men. But they have ambition. And they have rivals. Over the next seventy-two hours one of them will become the most powerful spiritual figure on earth.

Harris's (Fatherland; Enigma; Dictator) astute thriller unmasks chicanery behind the bolted doors of the Sistine Chapel. Following the pope's sudden death, high-ranking clergy converge upon the Vatican-several senior cardinals strategizing their paths to succession and one praying for impartiality. Far from aspiring to the papacy, Cardinal Lomeli, dean of the College of Cardinals, doubts his own worthiness to preside over the 118 red hats secluded from the outside world to vote in the centuries-old papal conclave, the "oddly wonderful" amalgam of ceremony, politics, and mysticism. Rumors of the late Holy Father's paranoia and the undocumented dismissal of one contender surface almost immediately. Internal corruption, individual transgressions-even espionage-send the voting factions into chaos, then send them in a shocking new direction. Meanwhile, the devoted masses await disclosure of the new pontiff's identity. Roy McMillan narrates with subtle intensity, ably performing Latin liturgy and diverse cardinals' accents, conveying Lomeli's perspective so credibly that readers not only witness a famously secretive ritual but also share the devout dean's turmoil as he navigates momentous ethical quandaries. VERDICT Steeped in ecclesiastical and historical insights, Harris's suspenseful drama is warmly recommended for all fiction collections. ["An enjoyable read, with its insider details of life at the Vatican": LJ 9/1/16 review of the Knopf hc.]-Linda Sappenfield, Round Rock P.L., TX © Copyright 2017. Library Journals LLC, a wholly owned subsidiary of Media Source, Inc. No redistribution permitted.

Thriller Award-winner Harris (Dictator) successfully dramatizes the selection of a new pope. In the near future, the pontiff dies suddenly of a heart attack, and the Vatican leadership works fast to ensure an orderly transition. The process is conveyed from the perspective of Cardinal Jacopo Lomeli, the dean of the College of Cardinals, a rational and sympathetic figure who a month earlier sought permission to retire to a religious order. As the cardinals gather from around the world to vote, factions quickly develop around the leading contenders, including Joshua Adeyemi of Nigeria, who's seeking to become the first black pope, and Lomeli's successor as the Vatican's secretary of state, Aldo Bellini. Bellini gives Lomeli a glimpse at the hidden turmoil at the Vatican when he reveals that on the day of the Holy Father's death, the dying pope confided to Bellini that he had lost faith in the church. As the maneuvering for command continues, Lomeli must try to steer a path toward consensus. This is another impressive outing from an extremely versatile author. Agent: Michael Carlisle, Inkwell Management. (Nov.) © Copyright PWxyz, LLC. All rights reserved.

Harris, creator of grand, symphonic thrillers from Fatherland (1992) to An Officer and a Spy (2014), scores with a chamber piece of a novel set in the Vatican in the days after a fictional pope dies.Fictional, yes, but the nameless pontiff has a lot in common with our own Francis: hes famously humble, shunning the lavish Apostolic Palace for a small apartment, and he is committed to leading a church that engages with the world and its problems. In the aftermath of his sudden death, rumors circulate about the popes intention to fire certain cardinals. At the center of the action is Cardinal Lomeli, Dean of the College of Cardinals, whose job it is to manage the conclave that will elect a new pope. He believes it is also his duty to uncover what the pope knew before he died because some of the cardinals in question are in the running to succeed him. In the running is an apt phrase because, as described by Harris, the papal conclave is the ultimate political backroomalbeit a room, the Sistine Chapel, covered with Michelangelo frescoes. Vying for the papal crown are an African cardinal whom many want to see as the first black pope, a press-savvy Canadian, an Italian arch-conservative (think Cardinal Scalia), and an Italian liberal who wants to continue the late popes campaign to modernize the church. The novel glories in the ancient rituals that constitute the election process while still grounding that process in the real world: the Sistine Chapel is fitted with jamming devices to thwart electronic eavesdropping, and the pressure to act quickly is increased because rumours that the pope is dead are already trending on social media. An illuminating read for anyone interested in the inner workings of the Catholic Church; for prelate-fiction superfans, it is pure temptation. Copyright Kirkus Reviews, used with permission.
More book reviews at iDreamBooks.com